skip to main | skip to sidebar

For the first time I love monday =D

Arrrrr I'm currently in love with this. 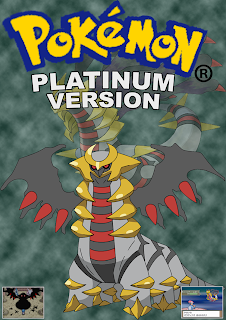 LOL I've played ALL the previous pokemon versions since I was a kid and now I would like to try on the newest version for now, Platinum. 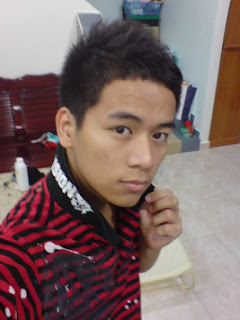 Wish you had a wonderful 18th birthday orhx. =D
And take good care of yourself too...^^
Posted by Princer at 2:53 PM No comments:

Last night slept around 3am YAY!

Wake up around 9am WAO!

Prepare to go shopping with Bernadine. ^^

Bernadine is accompany with her friends.
One of them is Carmen. =)

Then went for shopping. Saw a Baby Milo's shop.
Went inside. Me come out with a shirt lol. Sorry mummy I bought myself shirts again..haha..=D

And then went skating.
Me and Bernadine. =D 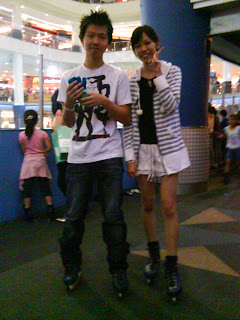 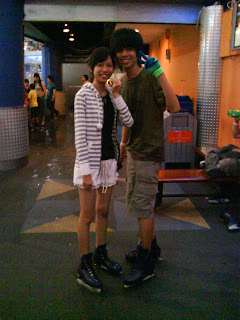 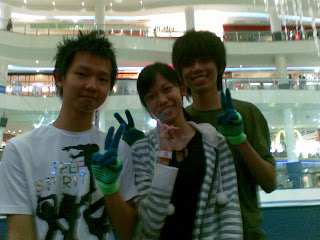 Skating was awesome. I would like to go again. =D haha..^^

After that went for arcade.

Then went for dinner.

Then I purchased this from coffee bean, 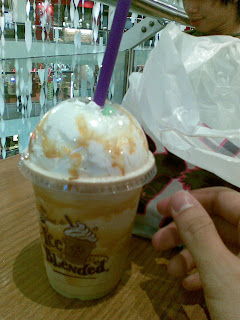 Then we all split up. We all went back to our condo respectively.

Andrew fall asleep in the LRT...haha... 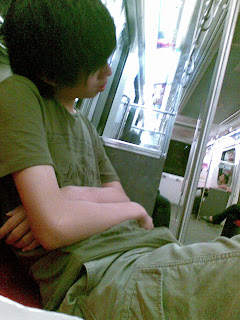 I love today.
Maybe next Saturday I'll have much much more fun than today....*ehem =D
Posted by Princer at 1:21 AM 8 comments:

Lat time when i went to Sunway Pyramid with Dexter and my cousin.

Haha...yea i love KFC.
There's a story behind about why I love KFC so much.

Okey its like long long time ago,
there was a kid,
named Princer Phang Kang Zhan.
His parents restricted him from eating foods like KFC,Pizza Hut,McD, and so on.
Their reason last time is like "No way, These were unhealthy foods,boy." says mummy and daddy.
And therefore, his parents only brings him to KFC once a year. I repeat once a year. Or sometimes twice a year. Or even worst.
So there's it..haha..
And I could say from year 1996 till 2007 like that I only visited KFC stall for like...urm...5 times perhaps? @__@ pity me..T__T
During the year 2008, I was in form 5 la, wao life's great. haha.
Mostly before movie time with Perry them we surely chiong for Sarawak's Plaza de KFC. =)
I miss those times really. haha...
Then year 2009 ( this year la ) I was away from my parents so you know....=p

And thats why when peoples invited me for dinner or lunch,

Peoples : Hey kang zhan lets go for dinner tonight.
Me: Yea sure. How about KFC?
Peoples: KFC again?
Me: Or you choose la..lol..

I would suggest KFC first..haha...sorry ya peoples..=p =p
next time you guys suggest me what to eat lorh..haha..XD

Lol today was so unpredictable.haha...
Planned to hang out with Bernadine de..but..lol..don worry de la ben still got many chances ^^
AHHHHH went for Harry Potter with Andrew Chai today. 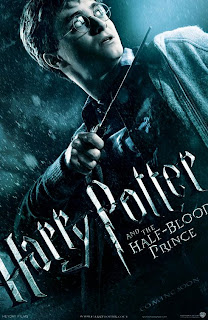 Well the story wasn't that exciting but overall it was quite 0key...haha...=)
Posted by Princer at 1:25 AM No comments: 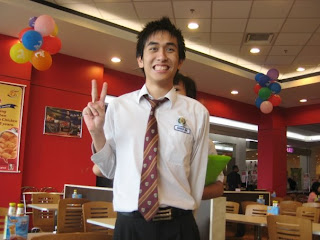 Walao i bet u feel kantung coz even i'm not in kch I still wish you happy belatday eh =p =p =p
hahaha^^
so siaibin i know XD haha..
kla 2am already lol..
sleep sia ~__~
Posted by Princer at 1:37 AM No comments: 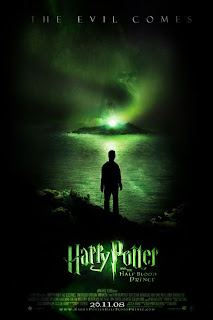 a watch this badly,

Yea...yesterday like around 11pm like that me, andrew chai,and dexter ma planned to go to Feeling Cafe(lol they even have their own website) due to the stress that we're experiencing at college wtf....

I love the environment there,
A cafe full of feelings lol..
Every costumers there were seems to be enjoying by drinking and playing poker after they had gone through their day.
And there are peoples who's hired to sing on stage. Its like costumers write songs that they would like to hear in a piece of paper and give that particular piece of paper to the hired singer LOL. Then they will sing for ya. Birthday song included..haha..

I ordered a Vanila and Strawberry Ice Blended. 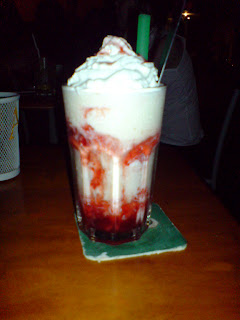 Dexter ordered The Little Angel..well...the name is so special right...haha.. 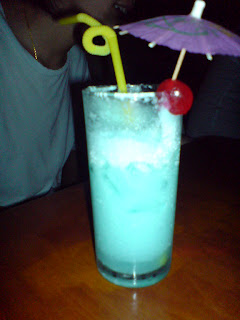 Andrew ordered food instead of a drink.
Well, after we had finished our drinks,
Andrew don't feel like leaving the cafe due to the hired singer didnt sang the song that andrew requested..haha..then bopien lorh..the 3 of us ordered drinks again. 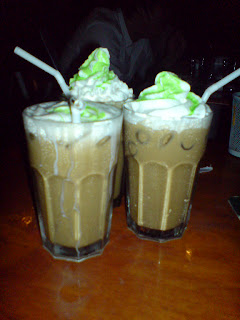 While waiting we gambled. 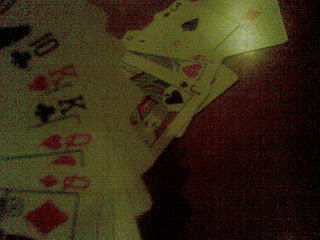 Nola we play for fun only la..haha..

Then like after 2am like that andrew's requested songs still haven been performed yet LOL and the hired singers says
"Thanks for coming and hope ya enjoyed your day. =D buhbya"
Andrew's pissed off..hahaha XD
And there's it.

well yea...i've been very the busy in these few weeks.
finally week 8 is coming.

Monday = curriculum assignments. wtf la curriculum also got assignment gok..but after this semester is over i need no to involved into any curriculum anymore. its worth it actually. Jiayou orh Dexter Ma in sem 2..haha..XD

Tues = Presentation for one of my subject,Hubungan Etnik. hmmm...even like i'm already doing this thing(presentation infront of the class) every year ever since I step into Form 1 lol...hoping for the best lorh...=)

Wed = another presentation...for my English. I'm excited instead of exhausted. as if la..haha..@_@

Thurs = Computer test...well...its all about testing my knowledge for urm...Microsoft Excel..lol..the tutor says this test got contribute marks for the final exam. So I'll be more serious. Serious serious serious.

Friday = Preparing to complete the assignments for week 9.

Next week I'll be damn busy.


A message to my cousin,Caroline..."Actually college life is way busier than Form 6 okey...haha..good luck and I'll miss you ^^."

Congrats to those who had completed their first semester in college/uni. =D

happy hols to you guys too =)

WOW.
Valerie sent me an e-mail contain nice and meaningful pics in it.
One of my favorite is this one, 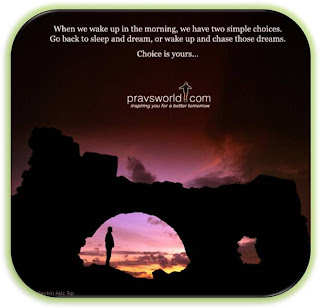 The choices is ours.

My dad will be visiting me during 4th September like that. =D
actually he's on vacation with his friends lol =____=

Hope i could spend time with him because i really miss my dad alot alot I REPEAT AGAIN OKEY ALOOOTTT!!!!!!
but then my semester test is on 7th September...
LOL.
semester test huh?so what,

DO YOU THINK I CARE? 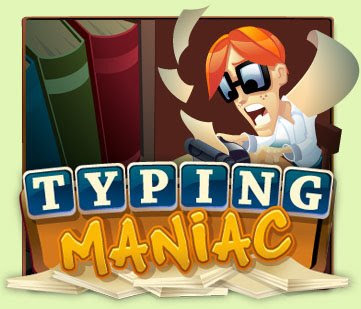 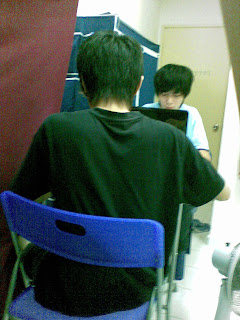 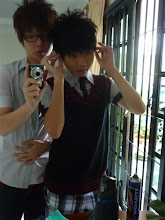 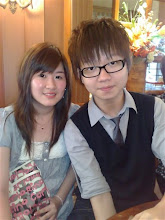 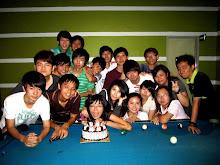